All the resolutions put forward by the Company were approved at the Meeting. The number of directors for the ensuring year has been set at four. Messrs. George Dorin, James Moore, William Ying, and Haifeng Liu were elected directors of the Company and will hold office until the next annual meeting of the Company or until their earlier resignation or removal. Manning Elliott LLP, Chartered Professional Accountants, was re-appointed auditor for the ensuing year.

Detailed results of the vote for the election of directors held at the Meeting are set out below: 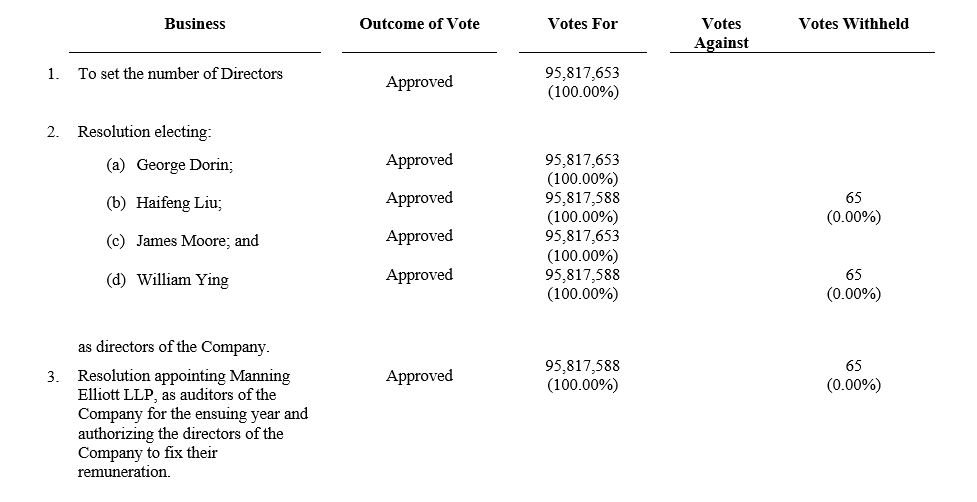 About Benchmark
Benchmark is a diversified multi-licensed cannabis producer focused on a three-way vertical business model targeting the medical and recreational markets in Canada. The Company’s business plan also includes a strategy to become a Canadian licensed producer to pioneer selling medical cannabis and hemp throughout Asia, in countries where it is legal to do so.

Benchmark is focused on producing the highest-quality, indoor-grown cannabis for patients and adult recreational consumers, as well as developing international business partnerships to extend the Company’s global footprint.

Benchmark’s 100% owned subsidiary, Potanicals Green Growers Inc. (“Potanicals) is a Health Canada licensed producer under the Cannabis Act and its regulations. The Company is producing at its indoor Peachland, BC Cannabis Complex and is constructing a Phase II expansion of an additional 10,000 square foot extraction facility there. Along with cultivation and production, the company’s Peachland BC facility also provides propagation, cultivation, cloning, storage, research and development, genetic improvements.

As part of its expansion strategy, the company and a joint venture partner completed a second facility, a 4-acre Greenhouse Operation in Pitt Meadows, BC. The Company, through Potanicals, has received its second cultivation license, effective November 29, 2019, from Health Canada for the Pitt Meadow greenhouse.
For further information, please visit the Company’s website at www.benchmarkbotanics.com or the Company’s profile at www.sedar.com.
If you would like to be added to Benchmark’s news distribution list, please sign up at Investor Relations info@bbtinc.ca
ON BEHALF OF THE BOARD OF
BENCHMARK BOTANICS INC.
“William Ying”
William Ying
Chief Executive Officer

The CSE has not reviewed and does not accept responsibility for the adequacy or accuracy of the content of this release.